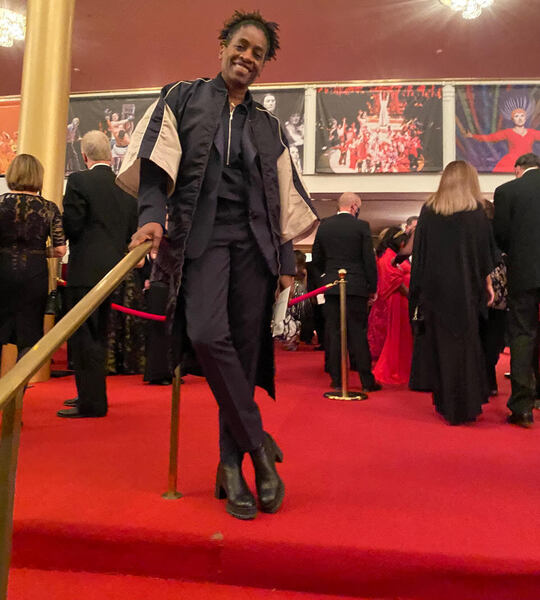 One cool thing about books is that you can borrow them from libraries. If your library doesn’t have one of my books, ask the librarian to order it from another library thru their inter-library loan system. It usually takes a day or two but they will get it to you. If there’s a book of mine you want to own go to Bookshop.org and search under my name: Jacqueline Woodson. My books will come up and you can order them (or it).

But if your local independent bookstore has never heard of me, looks at you cross-eyed at the mention of my name, says “We can get it for you in a week at the earliest,” is too lame to carry even ONE of my books in paperback, etc. – Then go online to find my titles and do what you need to do to…
Keep reading!!

Used to be blue but now it’s most of the time, green. I like earth tones more than pastels and I love stripes!

Do you have brothers and sisters?

I have an older brother named Hope, and an older sister, Odella, and a younger brother, Roman. I’m the only one in my family with a name you’ve really heard before. Except for the name “Hope,” but it’s usually given to a girl. My grandfather’s name was Hope. His wife, my paternal grandma, was named Grace. I think that’s pretty cool that their names were Hope & Grace. If you want to know more about them all, read Brown Girl Dreaming.

Oh – Even though I’m five feet ten inches tall, I’m the shortest person in my family.

Where were you born?

Columbus, Ohio but I spent my early life in Greenville, South Carolina. We moved to Brooklyn when I was about seven.

When were you born?

I was born on February 12th, on a Tuesday.

What was your favorite subject in school?

I loved English and anything where we got to write. I was terrible at math and science. I loved gym and Spanish and anything that allowed us to dance or jump around. I wasn’t a big fan of sitting still too long unless I was reading. I always read the same books again and again. I’ve also always read very, very slowly. I still do.

What are/were some of your favorite books?

As a kid, I loved anything by Virginia Hamilton or Judy Blume. I also loved The Selfish Giant by Oscar Wilde and The Little Match Girl by Hans Christian Anderson. Oh—and Stevie by Jon Steptoe. Roll of Thunder, Hear My Cry by Mildred Taylor. And Zeely by Virginia Hamilton. And of course, Are You There God? It’s Me, Margaret by Judy Blume. These days, I feel like my favorites list of books just keeps on growing but I love anything by Jason Reynolds, Kwame Alexander, An Na, Rita Williams-Garcia, Naomi Shihab Nye, and lots and lots of other people.

Do you have any pets?

We have two dogs, one named Toffee and Shadow, and a cat named Fred.

Why do you love writing so much?

Because it makes me happy. Even when the words are slow in coming and the story seems all lopsided, writing keeps me happy.

Where have you traveled?

I’ve been to all fifty states (including Alaska) at least two times and have met some really cool young people in all of them. I’ve been to England, Sweden, Brazil, France, Germany, Spain, Ghana, Morocco, India, Dominican Republic, Puerto Rico, Belize, Virgin Gorda and Mexico. And probably a couple of other places I don’t remember right now.

What languages do you speak?

Mostly English but I also know Spanish and a good bit of American Sign Language. If I am desperate, I can find a bathroom in French and German.

What are some of the other languages your books are published in?

Yes. Anything you do that you want to do well can be difficult at times. Revising is hard. Thinking of new things to write about is hard. And the difficulty makes it that much more rewarding.

Are any of your books based on your life?

The only ones that have some autobiographical content are Brown Girl Dreaming, Visiting Day, Sweet, Sweet Memory, Show Way and all the Maizon books.

Do you ever get Writer’s Block?

Nope. There’s no such thing. I think it’s just your mind telling you that the thing you’re writing isn’t the thing you really want to be writing. If this happens to me, I start writing something else. I’m usually working on more than one book at a time. When the ideas stop coming for one, I move on to another one.

Do you have any kids?

What music do you listen to?

Here are some of the people on my computer: Toshi Reagon, Joni Mitchell, Tierra Whack, J Cole, Childish Gambino, Talib Kweli, Bruce Springstein, The Black Eyed Peas, Nas, the Indigo Girls, ani difranco, Eminem, Lauryn Hill, Ke$ha, and the whole Free To Be You and Me soundtrack. Although, the music list changes often.

How many books do you work on at one time?

I’m usually working on two or three books at once.

Where do you write?

I have a writing room in my house in Brooklyn. Sometimes, I sit on the stoop or write at Prospect Park. Sometimes, if an idea starts coming, I just write wherever I am and on whatever I have.

Of all the books you’ve written, do you have a favorite?

Nope. I like each of them for different reasons. Sometimes, long after I’ve finished a book, I’m still thinking about the people in it.

If you couldn’t write, what would you do?

Play for the NBA—Try to make those Knicks a winning team!

Do you think you’ll ever stop writing?

When I stop breathing.