Fun Facts About Me

I can only write with my notebook turned sideways. When I was a kid, I wrote with it turned upside down.

I write, catch, and eat with my right hand. Everything else – batting, shooting a basket, holding a golf club, etc. is done with my left.

I can shake my eyeballs in bright light.

I am very, very neat. Except when I am not.

I know the lyrics to about a thousand bad songs from the 1970s, including songs from tv commercials and television shows.

I have a lot of my writing memorized so that I don’t have to carry my books everywhere.

I once wrote a book in two weeks and it only needed a little revision.

The next book I wrote took four years.

I have only lost at checkers once or twice. I have only won at Chess once.

I can jump double-dutch.

Even though I can walk to a Brooklyn Nets game from my house, I’m still a die-hard Knicks fan.

I love it when it’s quiet and sunny.

Fall is my favorite season.

My son was born in the United States but since then, has never spent a birthday in this country. (His birthday is February 19th which is usually Winter Break.)

I share a birthday with Abraham Lincoln and Judy Blume.

I laugh at really dumb jokes.

Something many people don’t know about me:

When I was a toddler, I did a series of advertisements for Alaga Syrup in Ebony Magazine. Even though I was only two, I looked a lot older and the ads that ran often featured me as a school-aged child thinking about Alaga Syrup.
I don’t remember wishing anything about Alaga Syrup. I wasn’t even in school yet. Still, I think of it fondly because it was, technically, my first job.

There are a few special places I love to write… 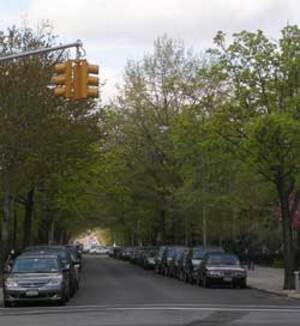 Here in Brooklyn where I live: (Yes, there really are trees in New York City!) 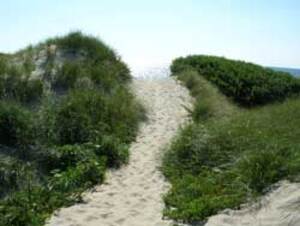 Anywhere on the Cape where there are dunes nearby like in this picture: 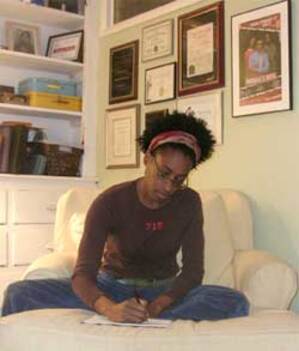 Sitting on the yellow chair in my office: